Remembering
the Nights
in Safe Haven
A Short Film in Three Parts
Until the Covid-19 pandemic, gay and queer nightlife was a small, yet important part of me. In Amsterdam, Mokum, our safe haven, I marvelled at people from backgrounds and genders at times incomprehensible to me. We danced, we hugged and felt each other’s warmth and sweat. The demons of the dark weren’t there to haunt me anymore.
Soon after the first lockdown, I reached out to some of the ones who still resonated in my memory. We all miss the collective haze of the night. We miss safe places where lust and passion took over and we could release the pressures of everyday life. In the summer of 2020, we created our little cinematic world through which we compensated for our loss. Together, we created this new mesh of impressions.
Meet my kin spirits...
Belle Dommage
“In essence, Belle Dommage is an extension of Miguel. The one who allows him to be everything the common society would never allow him to be.”
The persona of the Portuguese-born Miguel Matias represents parts of him so intense, the outside world can grasp them only through performance.
I won’t deny to be projecting my inner worlds throughout my work. For the scenes we shot, I would come up with a list with all sorts of fantasies, some explicit. With a slight awkward feeling I asked Miguel to choose the ones that resonated in him. Nothing was too extreme for Belle Dommage. I guess I needed time to realise that things are okay if I create a safe setting in which anything is possible.
“When you're on the stage, [you’re in] an undefined space that lacks a specific context without a specific morality, a sort of vacuum. There, anything can exist and simply be without any limits or definitions. The purest self, without limits.”
We see Belle Dommage who is lost in the limbo of their mind, still high from the night before. “In real life I would put on my sunglasses and try to walk straight. In the scene we made, I depicted the effect of drugs on the body without holding oneself back.”
Accompanied by Lifecutter's soundtrack, a physicality of masses that carry a fetishist atmosphere, Belle's personality splits into various others. It's still Belle we see, but this time they're not lost in the woods anymore. 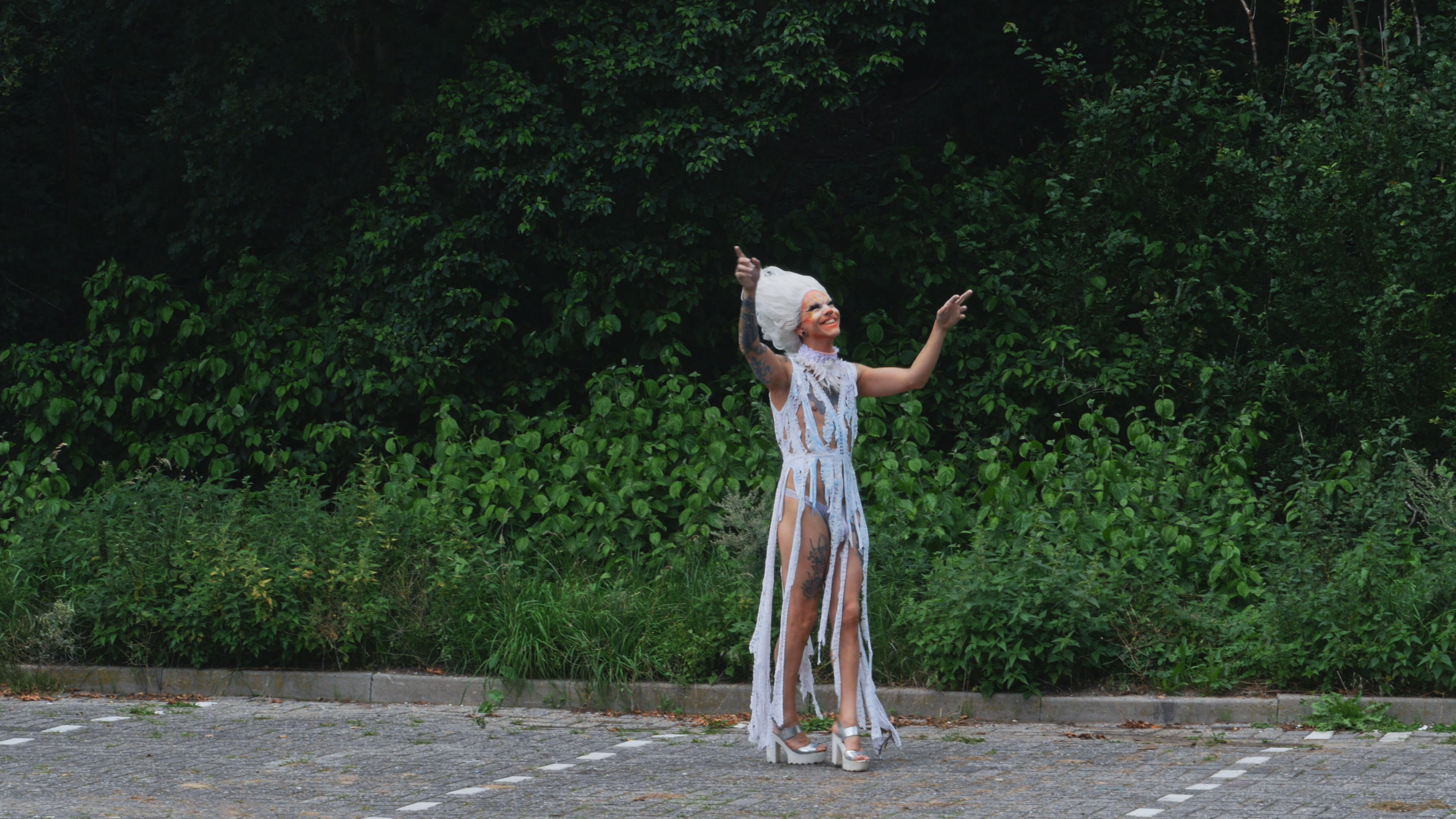 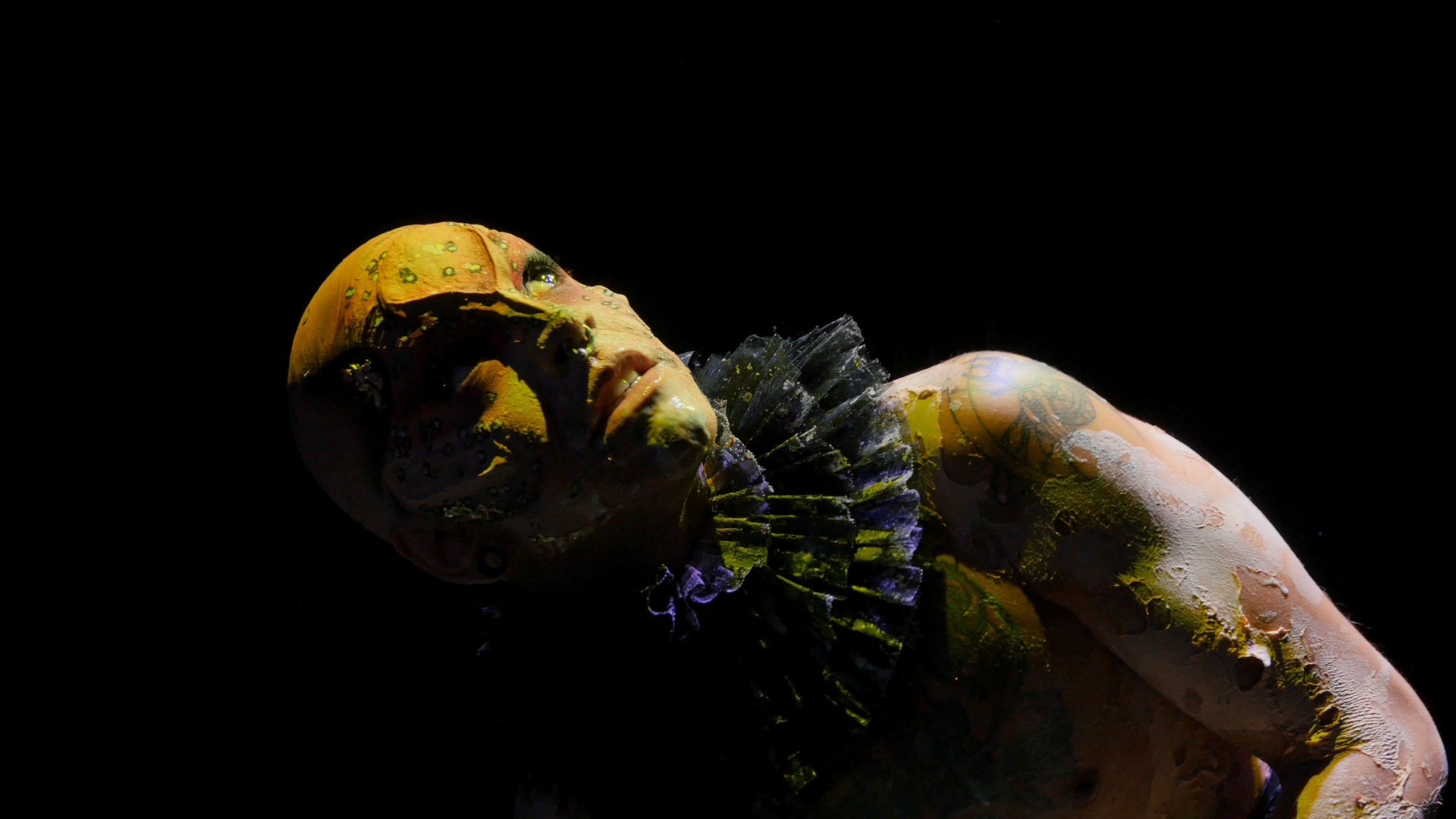 C Stein
“Before corona, I saw a documentary about monkeys. It said that monkeys - and we are primates - are supposed to touch and are supposed to hold, to be close and pass bacteria on. The closeness that we would when we were monkeys is being taken away.”
In recent two years, during which we visualised tactile autoerotic fantasies, C Stein has become my gay muse. In these experimental improvisations, one with fruit and another with mud, there was no acting involved. The short films Rapture and Descent are recordings of intimate explorations in ecosexual settings.

In Remembering the Nights in Safe Haven, C engages in a ritual placed into an industrial landscape with a nature reserve, a combination of worlds very typical of city outskirts of Amsterdam. The next scene of the film morphs into a fantasy inside a fantasy where C surrounds himself with tactile objects that are a surrogate for physical contact between humans.
I first wanted to portray a gay man who has been left to his own means regarding sexual intimacy. The scene was supposed to be dark and gloomy, illustrating the detrimental effect of chems. But did I really want to depict something that is a dead end in somebody’s life? And aren't monkeys an adaptable sort? Luckily, the props Bianca Huisman made were infused with a jolly queer life of their own and so was C, ready to play.
“We are monkeys that like to have fun. But they can’t have fun anymore. It’s a dark day for monkeys.”
Here’s to the playful monkeys that will pull us through!
Valerii and Oleksandr
Valerii: “You were enjoying life as fully as you could. You didn’t think that everything could stop in a moment.”

Before the pandemic, the brothers would go out to dance on regular occasions. And they made an impression. As if they were a part of techno version of Stravinsky’s Rite of Spring, they would simply dance. Relentlessly and synchronous, with unbridled fervor and optimism.

During our work on the film, I got to know them better. Valerii and Oleksandr arrived to the Netherlands as LGBTQ refugees from Ukraine. Their story is one of many in the country as they stand for people who are born in the ‘wrong’ part of the world with a ‘wrong’ sexual orientation where hiding one’s certain thoughts and feelings is a survival strategy.

Valerii: “Nobody told anything to other people, nor to each other. We kept these things secret. One time, I found a photo of my brother on a website of a Kyiv gay night club. On the picture, he was with a drag queen. I immediately sent it to my brother and I asked whether he knew it was a gay club. He replied that he knew this. And if we both knew that, we’re both gay.”

Oleksandr: “ When I arrived to the Netherlands, I felt quite lonely. There was no contact with my brother. There was no support from a person you can trust, talk to, share your thoughts with. After a year, he arrived here. Our relationship improved and became better than before [in Ukraine].”
With Valerii and Oleksandr I felt an intensity that reminded me of my own when I was entering the gay scene. The far memories of finding myself on the dance floor, forgetting about everything and everybody around me. 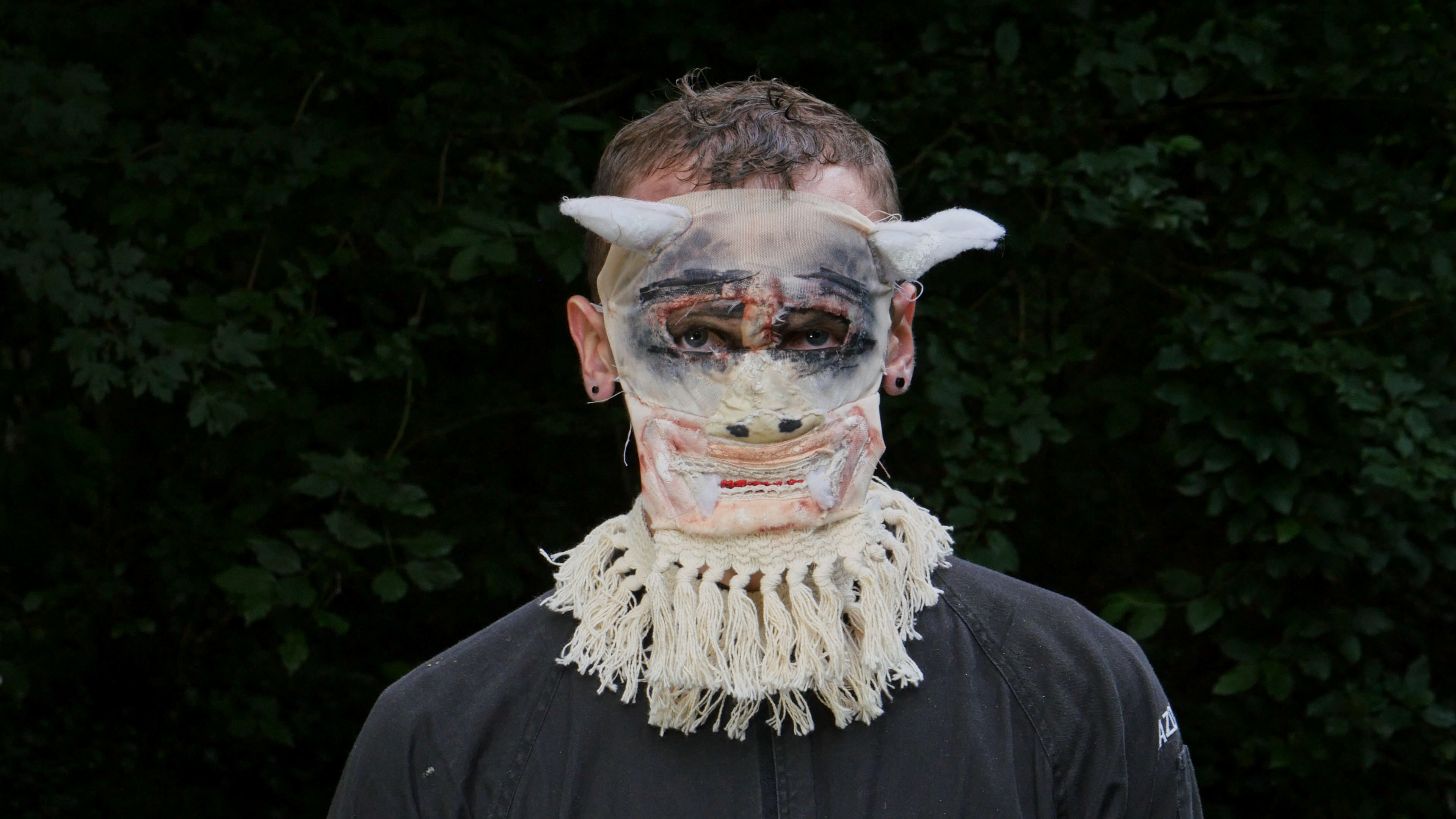 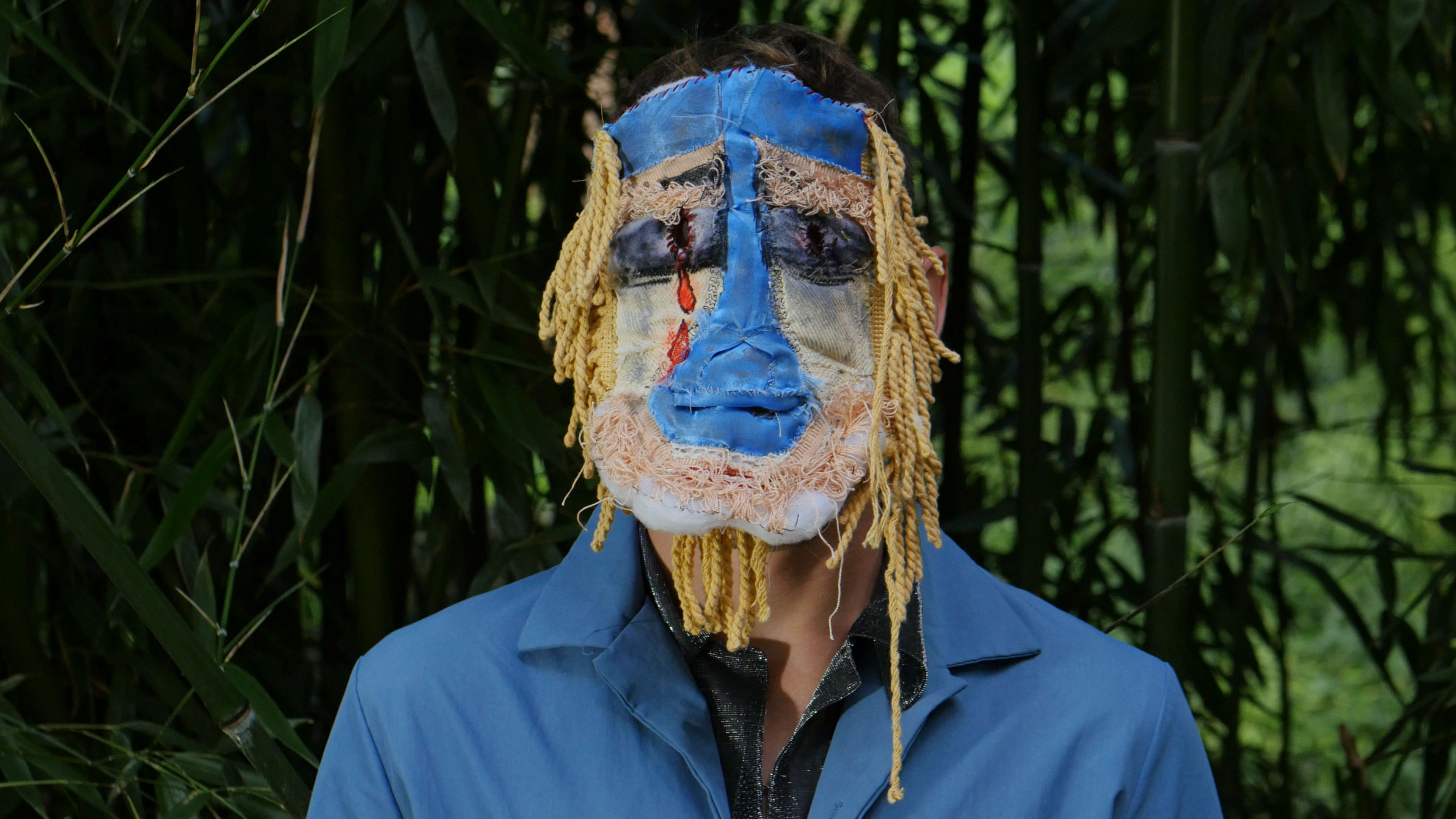 Synopsis
A drag performer rendez-vous with their many personalities during the after hours. A man is taken over by his surrogate lover, made of textile. Two brothers dance in an empty nightclub.
Remembering the Nights in Safe Haven (2020) is a short film in three parts. The starting point of this project is the sudden loss of nightlife due to the Covid-19 pandemic and its detrimental effect on the social fabric of queer people. The film addresses this loss by means of fantasy scenes that suggest a mental state of suddenly having to adapt to our new reality.
Runtime: 17 min
Credits
Directed, filmed and edited by Iztok Klančar
Cast: Belle Dommage, C Stein, Oleksandr Pryshchepa, Valerii Pryshchepa
Soundtrack: Lifecutter
Styling and props for 'Skin Hunger' and 'The Rite': Bianca Huisman
Tracks: PTSD (© Lifecutter and Cartel 2020); Anvell, Siclar (© Lifecutter and Kamizdat 2015)
Many thanks to: Richard John Jones, Marios Giannakoulias, Marga Rotteveel, Fleurie Kloostra, Vincent Fitz-Jim, Oleksandr Perestrit, Mo J. Irsheid, Anne Rodermond, Mathijs Meester, Richard Keldoulis, Haico, Mitja Blažič, Jernej Škof

Safe Place
↑Back to Top

This site uses cookies for better functionality. I agree!